Hal Homer Chase was born February 13, 1883 and grew up in the small town of Los Gatos, CA, just outside of San Jose. Some reports say that he attended and played baseball at Santa Clara College but the school has no record of his having attended classes there. He joined organized baseball in 1904 as a player for the Los Angeles Angels of the Pacific Coast League, playing his first game on March 23 and going 0-3 at the plate. Two years later, at the age of 22, he joined the New York Highlanders (now known as the Yankees) of the American League.

The ban did not hold up however as Chase petitioned the National Commission to return and was reinstated for the 1908 season. When he returned the popular Chase was presented with a silver loving cup from his teammates.

In 1911, Chase’s first full season as player-manager, the Highlanders finished in sixth place with a 76-76 record. The following year he relinquished the job as manager. His fame was such at this time that during the off season he was acting in a movie, Hal Chase’s Home Run.

During the 1913 season Hal was traded to the Chicago White Sox. The following year he displayed more of the audacity that was to make him a thorn in the side of organized baseball. The newly formed Federal League offered Chase a contract to play with their team in Buffalo. Chase, however, was still under contract to Chicago. In 1914 there was a clause in every player’s contract that gave management the right to cancel any contract with just 10 days notice. Chase reasoned that what was fair for management was also fair for players. He gave the team 10 days notice and then jumped to the Buffalo squad. Upheld by the courts, Chase played the remainder of the 1914 season and all of the 1915 campaign in the Federal League and was one of the circuit’s major stars. Unfortunately for Chase, the 1915 season was the last for the new league. Chase’s rights were traded to Cincinnati and he joined the Reds for the 1916 season.

In 1919 the New York Giants acquired Chase from Cincinnati. Before the season was over, Giant’s manager John McGraw suspended Chase for “poor play.” Whispers of throwing games continued to be heard whenever Chase’s name came up. He would never play in the major leagues again. When the Black Sox Scandal of the 1919 World Series came to light in 1920, Chase’s name appeared in the document that indicted eight members of the Chicago White Sox. The court sent a subpoena to California but the state refused to extradite Chase and no further action was taken against him. Chase spent the 1920 season playing with San Jose in a weekend Class D league. In August of that year, the Pacific Coast League banned him from ever again entering a PCL stadium for attempting to bribe a pitcher to throw a game.

After playing for various outlaw leagues in California, Chase was recruited and hired by the Nogales Internationals to play first base and manage the club for the 1923 season. The team was made up of players from Nogales, AZ and Nogales, Sonora. They played their home games in both towns against teams from both the U.S. and Mexico.

Chase was popular in Nogales and was successful as a manager. The team beat traditional rivals Tucson and Phoenix and finished off on a barnstorming tour of Mexico that began in Sonora and ended up in Mexico City. Hal left at the end of the year but would return to Nogales from time to time.

Hal ended his major league career with a .291 batting average and 2158 hits. Unable to play in the major or minor leagues, Prince Hal disappeared into the “twilight zone’ of New Mexico and Arizona where organized base­ball had yet to establish a foothold. He played on semipro teams in Williams, Jerome and Nogales, Arizona before signing on as a player-manager in the outlaw Frontier and Copper Leagues for the Douglas Blues. He subsequently persuaded three of the banned 1919 White Sox players (Chick Gandil, Lefty Williams and Buck Weaver) to join the league. All of those banned or blackballed players appeared at Warren Ballpark, playing against the Bisbee Miners. Hal was popular with Douglas fans and became a businessman, purchasing a saloon across the line in Agua Prieta, Sonora, where Americans could thumb their noses at Prohibition and enjoy a legal drink.

After leaving the big leagues, Chase began his Arizona Odyssey that lasted for twelve years. Although Chase never recaptured the glory of his days in New York, he confidently traveled the bush leagues of Arizona as a big fish in a small pond. He was undoubtedly drawn to the rough and ready life style that was still prominent in border towns and the alcohol that flowed freely even during prohibition. His time in Arizona fluctuated between temporary highs and miserable lows before he finally returned to California a shell of who he had once been – Prince Hal, king of the first basemen.

Some time in 1935 or 1935 Chase returned to California and lived with his sister in Colusa. Over the last ten years of his life he was to suffer various illnesses including beri beri, a vitamin deficiency sometimes associated with chronic alcoholism. Finally in 1947 at the age of sixty four Hal Chase died. He is buried in San Jose at Oak Hill Cemetery with his parents and brother.

Excerpts from Lynn Bevill’s ‘Prince Hal and his Arizona Odyssey‘ were used for Hal Chase’s biography. 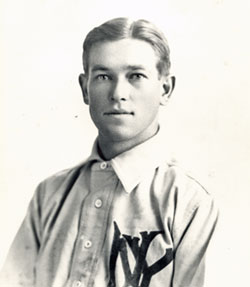