THE CASE FOR HAL CHASE IN BASEBALL HALL OF FAME

If Hal Chase had been such a great player, shouldn’t he then be voted into the Hall of Fame?  First, did Hal’s exploits between the lines earn him the distinction as one of the game’s greatest?  And second, was he guilty of actions that deserved exclusion from baseball’s shrine?

In terms of ability, the case for Hal Chase clearly hinges on his defensive prowess at first base.  Most consider Chase the best, or one of the best, to ever play the position.  Others receiving recognition include Gil Hodges and Keith Hernandez, two first sackers who haven’t entered the Hall of Fame.  Defensive first basemen haven’t received the recognition that fielders at other positions have.  Six ballplayers from other positions have entered the Hall of Fame largely due to their defensive prowess.  They include Brooks Robinson at third base, Ozzie Smith and Rabbit Maranville at shortstop, Bill Mazeroski at second base, Ray Schalk at catcher, Harry Hooper in left field.

Hal Chase compares favorably as a hitter to other defensive specialists already in the Hall of Fame.  Few can argue that the others are undeserving.  Gold Glove Awards or All Star teams didn’t exist back in the deadball era.  But more recently Brooks Robinson and Ozzie Smith were selected to fifteen All Star teams and won sixteen and thirteen Gold Glove Awards, respectively.  Robinson also won the league MVP distinction in 1964 hitting .317 and leading the league in RBI with 118.  Mazeroski won eight Gold Gloves, earned seven All Star team nods, and was the 1960 Major League Player of the Year.  Some on the list not only won championships, but earned distinction for their play in the post-season.

But Chase not only compares well against this elite group of athletes offensively, he stands head and shoulders above them.  His lifetime batting average is considerably higher than all of the defensive specialists, which demonstrates that Chase was not merely a “no hit, good glove” type of player.  He even won a batting title beating out Honus Wagner and Rogers Hornsby.  He ranked fourth or higher in the league in hits four different seasons.  He was in the top eight in RBI seven seasons; in the top three from 1915 to 1917.  His 363 stolen bases ranks third all-time among first basemen; the other two, Frank Chance and George Sisler, are in the Hall of Fame.  Critics point out that Chase had a poor onbase percentage and was simply a singles hitter.  Indeed, his on-base percentage was low, but it was not significantly dissimilar from the others in the group.  And the slugging percentage that ranks second in the group only to the powerful Brooks Robinson, even though Chase played in the deadball era, highlights that Prince Hal had a knack for extra base hits.

An aspect of Chase’s ability offensively that set him apart was the mastery of the hit and run play.  Many players attested that Hal Chase was the greatest hit and run batter in the history of the game.  And in the deadball era of “small ball”, the hit and run was arguably akin to a home run in today’s game.

In terms of fielding, few can argue that Hal Chase could be the greatest defensive first baseman of all time.  Many baseball historians name Chase as the first baseman on their all-time defensive roster.  The precedent has been set, with the inclusion of the likes of Bill Mazeroski and Ozzie Smith, that the best defensive players at their respective positions should be recognized in the Hall of Fame.  But more important, Chase not only was one of the great defenders, he redefined how the game was played at first base.  He ushered in a new era that has been emulated for nearly a century by defense-minded first sackers.

One might also argue that Chase earned consideration because of his courage challenging the reserve clause during a period when players were shackled by its clutches.

Perhaps after a century, one can understand that, although flawed like the game he played, Chase was good.  And from among the tens of millions of young boys who laced up cleats for over one hundred and fifty years, Hal Chase was perhaps the greatest first baseman.  And for that, he should be in the Hall of Fame.

Read WHY I LIKE HAL CHASE by author Chris Goode

Compare the records of Hal Chase and Hall of Fame great Brooks Robinson. 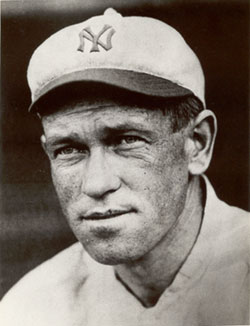