Prince Hal Chase demonstrated incomparable ability at an early age.  As a youngster, the California native son earned a reputation as a “ringer,” and was snatched away from the small town of Los Gatos, on the edge of the redwood forests of the Santa Cruz Mountains, to the world of Organized Baseball at the age of twenty.  The New York Highlanders, a new American League franchise financed by extortion and illegal gambling money raised by its owners, the former crooked New York Police Chief and the Tammany Hall power broker he protected, drafted the future superstar.

Ironically, nearly twenty years later, after an illustrious Hall of Fame career, Hal Chase was disparaged by the media and Organized Baseball as being corrupt.  Did Chase corrupt Baseball, or did Baseball corrupt Hal Chase?  The truth is that corruption and gambling were ubiquitous in America and in Baseball well before and long after Hal Chase.

Organized Baseball made an example of Hal Chase.  With its blacklisting of Hal Chase, it sent a clear message to all that gambling in Baseball would no longer be tolerated.  As a result, many associated with Baseball are not sympathetic to Hal Chase.  I’m not one of them.  As a fellow Californian, a baseball fan, and an historian with a century of context, I admit to being sympathetic to the legacy of Hal Chase.

I like Hal Chase for his pure love of playing the game of baseball.  If anything should define Prince Hal, it should be that he played a lot of baseball, within and outside of Organized Baseball, for nearly four decades.  In addition to playing for the New York Americans, Chicago Americans, Buffalo Feds, Cincinnati Nationals, and New York Nationals, he played for numerous town ball teams in California; on exhibition teams in the Northwest, Northeast, across the country and internationally; in minor leagues on the West Coast including the Pacific Coast League, California State League, and Mission League; on college teams including Santa Clara and St. Mary’s; and in the Copper Leagues of Arizona.

I also like Hal Chase because he was irreverent.  He fought Organized Baseball on labor issues throughout his career, but not because he aspired to be an advocate for player labor relations.  Rather, he resisted Organized Baseball because it attempted to prevent him from playing when and where he wanted.

Walter Johnson would compare player conditions to being treated as dogs.  Ty Cobb said of the conditions, “We the men who make baseball must have some rights.”  Even many years later, in 1969, Curt Flood would challenge the reserve clause, partially on the grounds that it violated the 13th Amendment that barred slavery and involuntary servitude.  Yet when many reflect on the career of Hal Chase, they overlook that he was one of the first and only players to successfully challenge the reserve clause in court.

To combat the power of the reserve clause to suppress player salaries, Chase courted offers throughout his career from independent leagues to use as leverage in negotiations.  His contract disputes were legendary.  He was sometimes disparaged by the media, often due to the disputes he had over contracts and his willingness to fight with Organized Baseball owners.

Proof of Prince Hal’s status as hero was the undeniable adoration by his fans.  They loved him in 1907 when, after being banned by the National Commission from playing for the California State Leagues San Jose Prune Pickers in October, he slipped into the lineup using the assumed name, “Shultz.”  They loved him in 1913 after he defected to the Federal League, and to avoid being arrested for violating his contract with the Chisox, he snuck into the ballpark dressed in a wig and a dress and hid out in a tool shed until game time.

And they loved him in his final game in California.

The game was bittersweet.  Over time, the places that Chase could play had diminished – he was once banned from the American League for challenging the reserve clause.  He was later banned from Organized Baseball for knowing about the Black Sox scandal and not reporting it.  Even back at home in California, his refuge, a place he could always count as sanctuary, leagues closed the door to Hal Chase.  Chase’s ban from Organized Baseball had even reached the small Mission League, where Chase was scheduled to play for the San Jose squad against Hollister on August 8, 1920.  If he played, the umpire was instructed to forfeit the game.

Chase wasn’t initially in the lineup.  But when the crowd saw Prince Hal appear in uniform, it “cheered madly.”  Hollister extended a lead in the first two innings.  In the third, the San Jose manager put Chase in to pitch.  As Hal walked to the mound, the fans stood and roared with applause.  Chase raised his hands to the cheers and basked in one final game of town ball for his local team.  The umpire declared the game a forfeit.  But the outcome of the game was secondary.  The paper reported, Chase was a hero in the eyes of the crowd of 1,400 fans, and was cheered to the echo when he first walked on the field.  (Chase Pitches; Game Forfeited to Hollister, San Francisco Chronicle.  Aug 9, 1920, pg 10)

Perhaps I like Hal Chase most because, for me, he is the most emblematic figure in baseball from 1905 to 1920.  He was an archetypal dead-ball player, a master of “inside baseball” – a superlative defensive player, with speed, and a master of the hit and run.  He was a barometer for the prevailing labor conditions during the era.  And he became an iconic figure in an era dominated by the ill effects of gambling.  Hal Chase is the penultimate symbol of the dead-ball era, not because he changed Baseball, but because he most significantly reflected the conditions that prevailed during the times.

Hal Chase has become engrained in the compelling story of Baseball and America.  The institution of baseball has a rich fabric.  Its history is cloaked in tradition woven together through time – a closet filled with skeletons as well as a chest brimming with hope.  It concedes imperfection while striving for the ideal.  It fails unrepentant.  The game evolves, and as time passes, we embrace its varied history in all of its richness and spectacle.  The legacy of Hal Chase abundantly enriches the understanding of Baseball in its infancy.

Rather than considering Chase’s career in the context of the preponderance of games he played, his breathtaking play on the field, his noble challenges to the National Agreement, or his being swept up by the gambling culture prevalent in America, writers have gathered evidence and statistics to try to support the case that Prince Hal was inherently bad.  They cite conflicts with managers, statistical analysis, the Jimmy Ring affair, or 1919 Black Sox knowledge to show a pattern of throwing games throughout his career.  In response, Hal Chase was never proven to be involved in any gambling on Baseball.  Prior to 1918, any involvement is pure speculation.  Hal Chase’s career has much more to reveal to the historian than the allegations of a thrown game.

In conclusion, in defense of Prince Hal, he admitted to knowing about the Black Sox fix and betting on the Series.  For that he was punished.  But what other players would have reported the fix to the owners?  In recent years when Jose Canseco reported the abundance of steroid use in Baseball, he was castigated.  That’s because players don’t squeal on players.  Back in 1919, no player would have “squealed.”  That said, the chips fall where they may.  And circumstances dictated that Chase and others involved in the 1919 scandal be permanently eliminated from the game.  But we have much to learn from Hal Chase about early Baseball and America, particularly regarding labor relations and the preponderance of gambling in the popular culture. 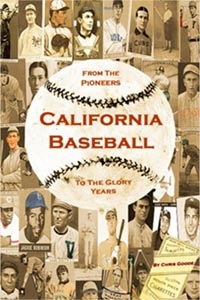 Chris Goode is the author of “California Baseball: From The Pioneers To The Glory Years“.